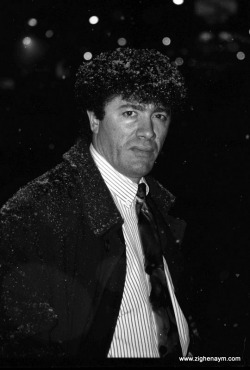 Matoub Lounes in New York City in February 1993
On Thursday June 25, 1998 Matoub Lounes was assassinated at a roadblock between Tizi-Ouzou and his hometown of Taourirt Moussa, Ait Douala.This event sent tremors among the Amazigh communities in North Africa, Europe and other parts of the World. His death has dealt another blow to the Amazigh movement, which has been peacefully claiming the rights to its language and culture.

Matoub, a very popular Amazigh singer, spoke out on behalf of Amazigh culture and language and denounced their discrimination and exclusion by the Algerian government. His fans and followers count in thousands if not millions in Algerian and abroad. His love for Tamazight was evident in his beautiful poems about Kabylia, the mountainous region of Algeria.In one of his songs titled “d idurar i d laemer-iw” (It is the mountains that are my life)1 he expresses his hope of unity of Imazighen and promises that his voice will be always be present to sing in Tamazight for Tamazight. 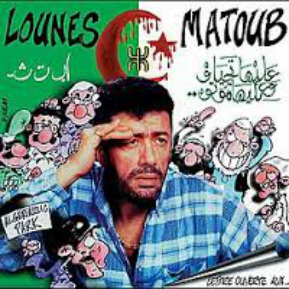 Not only was Matoub a talented musician and great poet, he was also fearless because fear did not stop him from speaking his mind. He was the first singer to denounce the successive Algerian governments that have lead the country to the present quasi-civil war that has been ravaging it for the past seven years.He criticized Ahmed Ben Bella, the first Algerian president (1962-1965) who initiated the 1963 “Solidarity Fund” program, which scammed Amazigh women of their jewelry sets during the early days of independence. Matoub also denounced Houari Boumediene (1965-1978) who set up a police state. Matoub became very popular, reaching the top of his career during Bendjedid Chadli’s era (1978-1991) when corruption and cronyism were widespread. Matoub targeted specific events such as the 1985 London meeting and accords between Ben-Bella and Ait-Ahmed, the present leader of the FFS political party and also a leader during the Algerian war of independence 2.

Themes in Matoub’s songs generally focused on the political situation of the country. He searched for music in the rich cultural heritage of Amazigh melodies.His poetic talent resulted in clear and strong lyrics. A case in point is his poem titled “Kenza”3,

Tahar Djaout, who was assassinated in 1993, speaks to his daughter Kenza, comforting her and explaining that his death may not be a loss to Algeria after all.

Early in June 1998, Matoub had finished preparing his fourth CD since the start of Algeria’s turmoil. The CD, title is “Lettre Ouverte à …” ( Open Letter to …) is his most political work.Matoub chose to use Amazigh lyrics set to the Algerian national anthem. Moreover, the apex of the song is reached when Matoub sings “ Betrayal, Betrayal, and Betrayal”, replacing the chorus of the Algerian anthem: “Become a Martyr.”

You do remember
Who was Bouyali? (4)
Whom he was with?
Do not bother to search
The door of death and oppression
It is Nahnah (5)

with whom he sealed a pact
(against the people) at Zbarbar (6)
And yes, today,
We see them in power (7).

It is them. They have turned coats.
They have tiptoed into power
To them, time has no limits
and when they will gain full power, they will ….

In the CD Matoub used both traditional music of Algiers and that of the mountains of Kabylia to sing his profound poetry.In addition, he enlisted his friend Ali Dilem, the young and famous cartoonist of the Algerian newspaper Liberté, to help him design for the front cover of his CD, shown above.The result was a set of political messages and drawings that describes Algeria’s present dire political situation. Using the Algerian flag as a background, Dilem’s cartoons of conservative religious figures are drawn on the white vertical stripe and are accompanied by their motto: “We live by it, We die for it.”On the green stripe, three cartoons depicting the present Algerian president Zeroual, the Prime Minister Ouyahia, and a military officer, are accompanied by the first letters of the Arabic alphabet, representing the government’s program of forced arabization. To pay a special homage and tribute to the Algerian artists who have suffered the losses of many of their colleagues during the last seven years, Matoub chose to include cartoon of Amazigh comedian, Fellag, holding a sign that reads “Algeriassic Park” on the lower left corner. Moreover, the red crescent and star of the Algerian flag are dripping blood and represent the bleeding of the Algerian people whose blood has been shed as they have been falling victims in political games.

The slaying of Matoub in June is a reminder of his previous close encounters with death. During the demonstrations of October 1988, he was critically shot at a close range by a government gendarme as he was distributing leaflets calling people to remain calm. He remained in a hospital for several months, and had to be operated several times after his recovery. He immortalized the shooting in his song titled “ajadarmi n leear” (the gendarme of shame). In September 1994, he was kidnapped by the Armed Islamic Group, a militant group in Algeria that has been waging a war against the government as well as writers, journalists, intellectuals, women, and peasants.While in captivity, he was tried and sentenced to death by his kidnappers. Amidst the popular demonstrations and threat of reprisal against conservative religious leaders, he was released fifteen days later in captivity.

Despite the danger, Matoub never accepted to live in exile in Paris. He frequently traveled back to Kabylia to be among his people and to see Kabylia: its numerous hills of olive groves and its majestic Djurdjura mountains.

The killing of Matoub sparked street demonstrations in many cities in Kabylia, opposing militants of Tamazight to government forces.It also inflamed the Amazigh population anger and heightened its opposition to the Algerian’s government plan to impose Arabic as the sole official language. The first demonstrations took place in the areas of Tizi-ouzou and Bgayet, but spread to other regions.At least the government forces reportedly killed five people.

Matoub did not survive his injuries. His burial took place on Sunday June 28 in his hometown of Taourirt Moussa, in the backyard of his house, between a fig tree and a cherry tree, in accordance to his wishes.According to reports, tens of thousands of fans and Amazigh activists poured from all of the villages of Kabylia and other Algerian cities and attended the funeral.Addressing the crowds, Matoub’s sister, Malika, emotionally said:” Today is a great joy. We are welcoming the birth of Matoub Lounes."His mother, Aldjia, held a hunting rifle and fired two shots. A few days later, several peaceful marches were held in Algiers, Tizi-ouzou and Bgayet. In Paris many prominent Algerian, as well as French intellectuals and journalists attended a meeting, organized by Amazigh associations in homage to Matoub.In Montreal, the Amazigh community held a peaceful vigil in his honor.In the USA, the Amazigh Cultural association organized two events in his homage: In New York, participants eulogized Matoub’s work and dedication.In San Francisco, Members paid a tribute to Matoub in an evening event that included a performance of Matoub’s songs and a display of his work, photographs, and articles.

1. See Matoub’s poem on Pages 7,8 and 9 of Amazigh Voice.
2. Ironically, Ait-Ahmed was jailed by former President Ben-Bella in 1963. He escaped from prison and went into exile.
3. See Matoub’s poem on page 9 of AV.
4. One the first Islamic armed group who took arms against the government.
5. Leader of the religious party MSP (Mouvement pour la Societé de Paix), Movement for a Peaceful Society
6. A forested area where armed Islamic groups meet and find refuge.
7. The government’s accords with religious political parties lead to the nomination to ministerial position of at least three MSP officers.In addition, a former FIS (Front Islamic du Salut) leader was also a minister in the previous government.